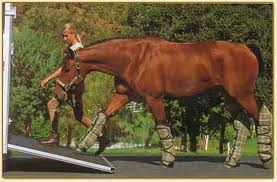 Just recently, after years of research, I have finally been able to give a name to what my wife and I have been living with for years.

It's an affliction, for sure, which when undiagnosed and misunderstood can devastate and literally tear a family apart.  Very little is known about O.C.E.A.N. Syndrome. But it is my hope this article will generate interest from researchers involved in the equine and psychological sciences. You will, no doubt, begin to identify similar symptoms in your own family and hopefully now be able to cope.

OBSESSIVE COMPULSIVE EQUINE ATTACHMENT NEUROSIS SYNDROME O.C.E.A.N.S) is usually found in the female and can manifest itself anytime from birth to the golden years. Symptoms may appear any time and may even go dormant in the late teens, but the syndrome frequently re-emerges in later years.

Symptoms vary widely in both number and degree of severity. Allow me to share some examples which are most prominent in our home.

1. Can smell moldy hay at ten paces, but can't tell whether milk has gone bad until it turns chunky.

3. Will spend hours cleaning and conditioning her tack, but wants to eat on paper plates so there are no dishes.

5. Enjoys mucking out four stalls twice a day, but insists on having a housekeeper mop the kitchen floor once a week.

6. Will spend an hour combing and trimming an equine mane, but wears a baseball cap so she doesn't waste time brushing her own hair.

7. Will dig through manure piles daily looking for worms, but does not fish.

8. Will not hesitate to administer a rectal exam up to her shoulder, but finds cleaning out the Thanksgiving turkey cavity for dressing quite repulsive.

9. By memory can mix eight different supplements in the correct proportions, but can't make macaroni and cheese that isn't soupy.

10. Twice a week will spend an hour scrubbing algae from the water tanks, but has a problem cleaning lasagna out of the casserole dish.

11. Will pick a horse's nose, and call it cleaning, but becomes verbally violent when her husband picks his.

12. Can sit through a four-hour session of a ground work clinic, but unable to make it through a half-hour episode of Cops.

The spouse of an afflicted victim:

1. Must come to terms with the fact there is no cure, and only slightly effective treatments. The syndrome may be genetic or caused by the inhaling of manure particles which, I propose, have an adverse effect on female hormones.

2. Must adjust the family budget to include equine items - hay,veterinarian services, farrier services, riding boots and clothes, supplements, tack, equine masseuse and acupuncturist - as well as the (mandatory) equine spiritual guide, etc. Once you have identified a monthly figure, never look at it again. Doing so will cause tightness in your chest, nausea and occasional diarrhea.

3. Must realize that your spouse has no control over this affliction. More often than not, she will deny a problem even exists as denial is common.

4. Must form a support group. You need to know you're not alone - and there's no shame in admitting your wife has a problem. My support group, for instance, involves men who truly enjoy Harley Davidsons, four-day weekends and lots of scotch. Most times, she is unaware that I am even gone, until the precise moment she needs help getting a 50-pound bag of grain out of the truck. 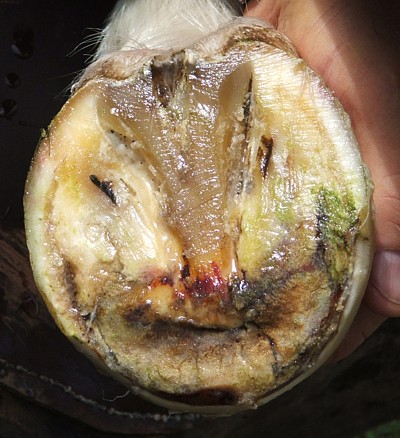 ALL EQUINES ARE PRONE TO LAMINITIS 12/ 11

There are only two kinds of horses.... those that have laminitis and those that could someday get it!

So what is laminitis and how do horses get it?
Put simply, laminits is the inflamation of the sensitive laminar corium in the hoof, causing a breakdown of the bond between the hoof wall and the coffin bone.
Severe cases are commonly known as founder and major causes are by eating sugar rich grasses, but it can also be caused by concussion of the hooves on hard surfaces, over-eating grain, infection from retaining afterbirth, excessive weight bearing on one leg, stress, vaccinations and medications.
There are many good texts giving much greater detail on the causes and treatments, so if you own a horse, you should be aware of how this condition occurs and how to keep your horse from suffering it.
One such book with an excellent chapter on laminitis is The Sound Hoof - Horse Health from the Ground up by Lisa Simons Lancaster (read a full review). You can purchase this book from www.tallgrasspublishers.com.
This book lists the early clinical signs of laminitis as:
If you suspect your horse has laminitis or founder then do your research, ask many opinions from varied sources (natural hoof care practitioners, vets, farriers) and comminicate with others who have successfully rehabilitated a founderd horse or pony.
Then DO someting about it - just hoping that early signs will go away is leading to a severe case which is more painful for your horse and your pocket!
Better still, assess your horse's sitation before it occurs;
Because laminitis is a "whole horse disorder" a holistic approach works well to identify and correct the root cause.
Be especially vigilant as spring grasses are starting to emerge. Restrict access to grass during the later part of the day and at night, and keep feeding plenty of hay so your horse doesn't feel the need to gorge on toxic grass.

For more detailed information on Laminitis and Founder go to articles at www.safergrass.org and www.naturalhorsetrim.com

An in-depth presentation on laminitis can be found here on the BarefootHoofsmith.com

More Excellent advice and articles can be found if you click here to read
Carola Adolf's articles on Laminits.

FABULOUS ONLINE VIDEOS ALL HORSE OWNERS NEED TO SEE – learn more about the dangers of over-feeding your horse and how to tell if they are overweight. Click this link to Fran Jurga’s Hoofblog to read more about how we inadvertently overfeed our horses and cases of laminitis are rising as a consequence – the videos are each about 7-9 minutes long.
http://hoofcare.blogspot.com/2008/12/favorite-video-horse-owners-should.html

Amazing Founder Rehabilitation through hoof trimming and wholistic care.
Most vets and horse owners consider a severe case of laminitis to be a death sentence. Some think it’s too much hard work and expense for them and too much pain for the horse or pony to endure. But why should we give up on those wonderful creatures who have given us so much? Previously it was thought that a foundered pony or horse couldn’t ever return to soundness and therefore usefulness – I was one of them. Since meeting Glynn and being involved in his rehabilitation, I’ve discovered otherwise.
With a good natural hoof trim on a regular basis and changes to a more natural diet free of rich grasses, a horse can grow a whole new hoof (or 4). This re-aligns the pedal bone and the horse becomes sound and able to perform again. In the process the owner learns how to care for the horse so laminitis doesn’t re-occur. Everyone is a winner!

Here is the story of Glynn and his recovery.
Glynn is a 22 year old Welsh Section A stallion and was a show ring champion in NSW in his younger days.
His move to Tasmania last year onto richer grass, and in-frequent hoof care caused laminitis which was so severe that most vets would have recommended euthanasia.
All four pedal bones had rotated through his soles causing open wounds and extreme lameness.


Glynn's founder stance prior to the first trim.

Cynthia was called for advice in February 2005 and fortunately, respected QLD Hoof Trimmer, Peter Laidley was in Tasmania for a workshop so was able to do the initial trim and prescribe a course of treatment. Trims were continued by Cynthia along with daily love and care from his owner, followed by another check up from Peter in May.

In the space of seven months he went from being barely able to move, to trotting and cantering freely on grass. He is now able to handle walking on gravel and his hooves will continue to improve and toughen up now that they are back in shape.

Treatment Summary:
*A natural trim every week for 8 weeks, then every fortnight for the next 6 weeks & now every 3 weeks.
* Initial bandaging of the front hoof wounds to keep honey in and dirt out until the wounds were healed (3 months).
* Painkillers to keep spirits up and encourage some movement (gradually phased out after 4 weeks).
* Confinement away from grass in a large stock yard on soft footing (wood chips & straw then some pea sized gravel was added in wet areas).
FOOD ALLOWED:
Free choice average quality grass hay plus oaten chaff with supplements and a small amount of pellets (Hygain Ice recommended) and a few vegetables for variety.
Once the hooves have regained a sound shape, a small amount of grass is allowed daily (1 hour of grazing with a muzzle on). Once the grass dries off, more grazing can be gradually offered.

Right after the first trim and padded hooves, Glynn was able to get relief and stand comfortably.

The front hooves prior to the first trim - extremely high heels contributed to rotated pedal bones through the sole.

The worst front hoof showing the pedal bone through the sole

The hind hoof also showing a wound from the rotated pedal bone and blood in the white line.

A hind hoof half way through treatment showing the new and old growth.

The front hoof is getting closer to its ideal shape 9 months later.

Glynn was trimmed by Peter Laidley for his 1 year anniversary trim and shows his appreciation with a pony kiss.

His hinds are looking fantastic.

His front hooves still have some recovery to do but are so much better.

Your Horse is what it Eats - By Cynthia Cooper
Horses evolved to eat small amounts of grasses, herbs and minerals almost constantly throughout the day.
They covered many miles to reach water and lived in small herds of varied ages and sexes.
Does this sound like the modern horse?
Not really - their involvement with humans has necessitated their restriction and artificial feeding for ease of use as a working animal.
But today the majority of horses are used for pleasure and that pleasure need not be all ours. If we want a happy, healthy horse to provide many years of companionship then we can change our ways to suit their nature.
Many new ideas are replacing traditional methods of horsemanship and health care with hoof care and feeding now the focus. Natural Hoof Care practitioners and forage researchers have discovered that horses cannot be fed like cows – on high sugar grasses that maximise beef and milk production. To do so, compromises the health of our horses by causing laminitis as horses become more carbohydrate intolerant – commonly called ‘good doers’.
When horses eat high sugar grass it causes a toxic reaction in the hind gut which then affects the connection between hoof wall and laminae (sensitive internal structure). This causes common hoof ailments such as abscesses, seedy toe, white line disease and deformed, shallow, sensitive hooves.
With a little thought and planning, better management and feeding practices can change all of this.
Here are some changes you can make with feeding to improve health: 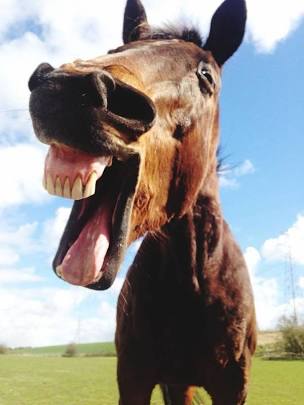 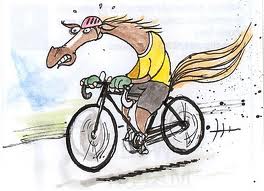 Whoever thinks horse riding and care isn't excercise never owned a horse! Between the shoveling and the grooming and the training, you're burning up a lot of calories-- for example, riding at a trot burns more calories than a brisk walk!