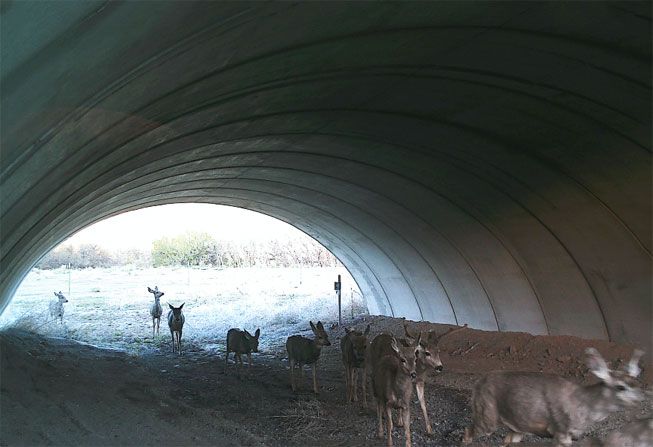 Colorado's wildlife overpasses and underpasses are keeping both animals and drivers safe, according to the Colorado Department of Transportation (CDOT). That's something we can all appreciate.

There are 30 such passages throughout the state, with two that cross a highway.

"They're extremely important,” Jeff Peterson, wildlife program manager for CDOT, told the Denver Post. "When you get into conflicts with wildlife, that raises the issue."

Safer roads for all

Statistics obtained by the CDOT showed that from 2006 to 2016 on U.S. Highway 160, in the area between Durango, and Bayfield, drivers and animals collided 472 times. Many of those incidents involved mule deer.

An underpass was constructed in this area and completed in 2016. Since then remote cameras have snapped images of wildlife using the underpass including deer, raccoons, coyotes, and other small animals, all taking advantage of the safer route.

"At the [Durango] underpass we're seeing a large number of mule deer going through the structure daily," CDOT biologist Mark Lawler told the Post. "Animals are using the structure; we're not just moving the problem."

The CDOT and Colorado Parks and Wildlife are working together to identify other spaces along highways that might benefit from wildlife crossings.

Wildlife pass-throughs have proven effective in other states. Thanks to the creation of wildlife underpasses, Florida had had a reduction in road-related deaths of the Florida panther, while Wyoming has seen similar success with its mule deer population. That state's crossings, including underpasses and deer-tight fencing, have reduced deer and vehicles collisions by 85 percent.

In December, The Washington State Department of Transportation reported the first visual evidence that animals were using its latest wildlife crossing. A coyote was spotted taking full advantage of the bridge to cross the interstate. The bridge is the first of its kind in the state with 19 other animal crossings slated to open in the next few years.

The cost of safety

Wildlife crossings can be expensive to construct, according to the Post, with costs ranging between $300,000 to well past $1 million. In Colorado, these crossings are built with tax dollars.

Then again, not having them can prove expensive as well. Insurance companies estimate that wildlife collisions average about $4,000 an incident. Along those lines, a 2005 report from the Virginia Transportation Research Council found that even with a minimal reduction in collisions, "the savings in property damage alone can outweigh the construction costs of the structure."

"We want to make sure that if were going to do it, we're doing it right. That’s why we don't just throw them in everywhere we can," Peterson said to the Post. "Putting the correct crossing in the correct place for the species you want to get from one place to another — that's where it gets tricky."